Do you know pumptracks? These urban equipments are designed as a closed loop, consisting of several consecutive bumps and steep bends. There are several types: natural ground, asphalt or in pre-built modules. 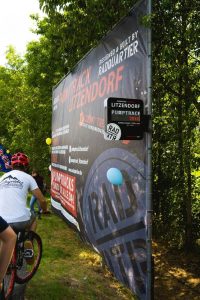 In Germany, twenty facilities are equipped with bicycle counters to measure traffic. In Litzendorf, for example, the municipality chose to install a pumptrack. The Radquartier company was commissioned to draw the plans and build the infrastructure. The company took the opportunity to implement ZELT-type induction loops inside the track to measure the equipment’s frequentation. “This way, we provide the only equipment that allows you to have direct feedback on usage,” emphasizes the equipment manufacturer.

In Litzendorf, the infrastructure even benefits from an Eco-DISPLAY Compact bike display installed along the tracks which counts and displays in real time cyclists (photo). Data is used by the city to communicate on the use of the infrastructure. As for example on the inauguration day in Litzendorf where nearly 19,000 passages were made during the day!

For other cities in Germany, the counters also make it possible to identify the most frequently used routes on the facilities, as well as the total number of km travelled by the participants.