Established in 2013, Downtown Grand Rapids Inc. (DGRI) is responsible for city building and place management in the urban core of Grand Rapids, Michigan.

Since 2016, DGRI has deployed a fleet of 15 Eco-Counters, predominantly PYRO-Box people counters (13) and TUBE bike counters (2). Count data is a ‘success measure’ KPI for the BID – a metric to track vibrancy and allow DGRI to reliably tell the story of the growth of downtown. Data is published in annual reports, is shared during monthly board meetings, and serves as a key tool for attracting and informing investors. People count data is used to understand the way people interact with the public realm and to capture the impact of DGRI`s extensive placemaking efforts, popup events and special event programming. 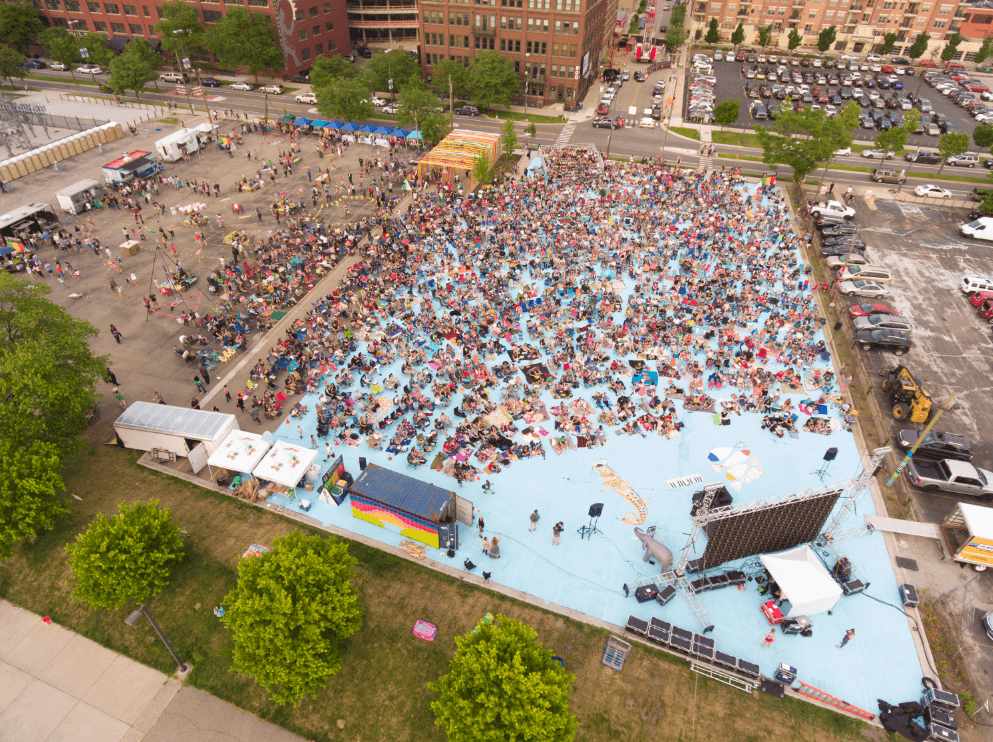 In summer 2018, DGRI undertook an impressive space activation project, Movies on Monroe, to transform a vacant lot into an inviting, family-friendly outdoor space with movies every Friday evening. Two PYRO-Box counters were used at a different entrance each week to capture attendance, monitor visitor flow and quantify the impact on nearby restaurants, retail and bars. The wildly successful event drew over 5,000 visitors the first evening! Furthermore, DGRI saw an 81% increase in people counted on nearby sidewalks during ‘Movies on Monroe’ versus a regular Friday. 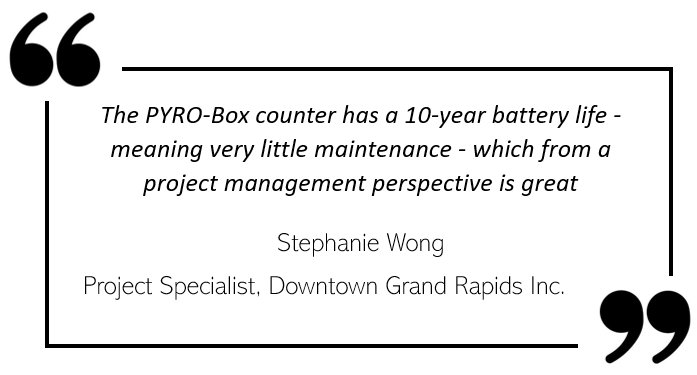 Capture the impact of a growing festival

PYRO-Boxes were also deployed to quantify the year-on-year attendance growth of ArtPrize, Grand Rapid`s independent, international art competition. To demonstrate the event’s popularity and communicate its benefits to the local community, people count data is made publicly available through downloadable, public, Eco-Visio 5 reports on the DGRI website. 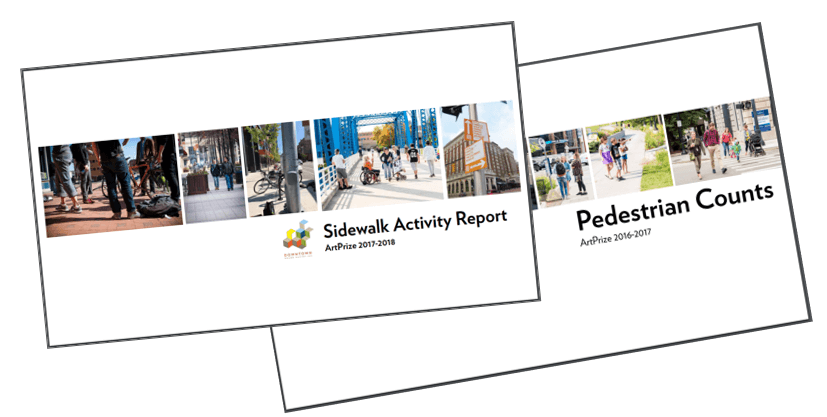 Nearly 400,000 visitors were counted in downtown Grand Rapids during the 2017 event, an 81% increase over 2016! 2017 also saw 308% higher sidewalk traffic during the festival versus an average fall day. The impressive count data is frequently picked up by local media and used in press releases, where count data is used to capture the growth of the festival in combination with economic impact and other visitation data.

ArtPrize just keeps on growing and growing in popularity; in 2018, a further 9% increase of total counts versus 2017 was seen. During the festival, sidewalk activity more than tripled (+331%) downtown compared to a usual September day – consistent with the last two years of data. At one site, ‘Rosa Parks Circle’, sidewalk activity was 5.4 times more than at the beginning of September, before the festival. 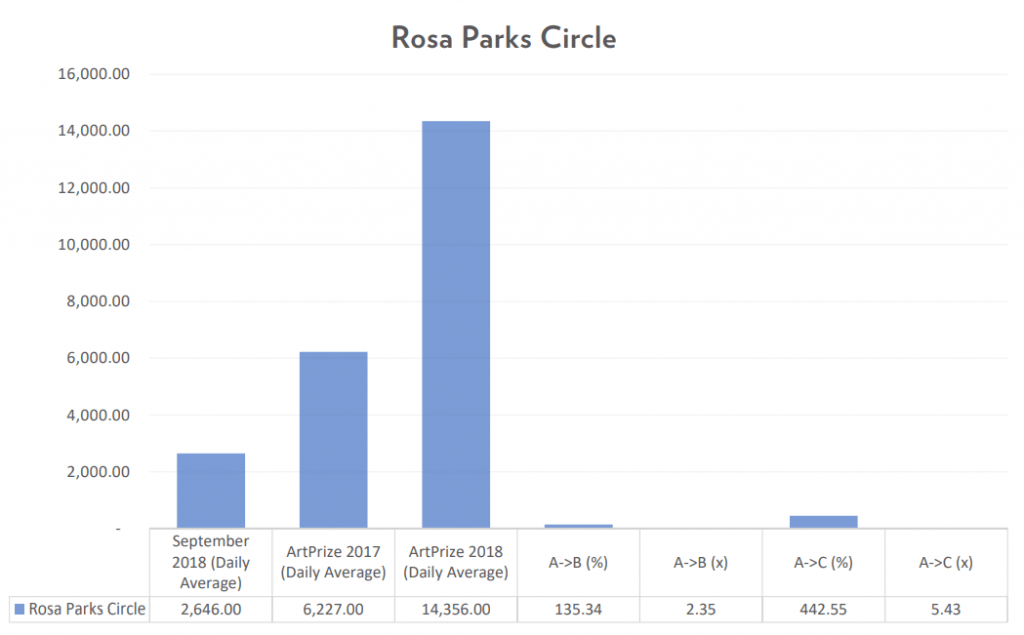 The impact of weather on daily festival visitation

Finally, DGRI deploys the Eco-Visio Weather Module – an Eco-Visio plugin which overlays site-specific weather data over counts – in their reporting to provide daily context for people counts during the festival. As you may expect, wetter or gloomier days see lower pedestrian counts vs. sunny days. Overall, despite experiencing a rainier September, ArtPrize 2018 still grew significantly year-on-year. Way to go! 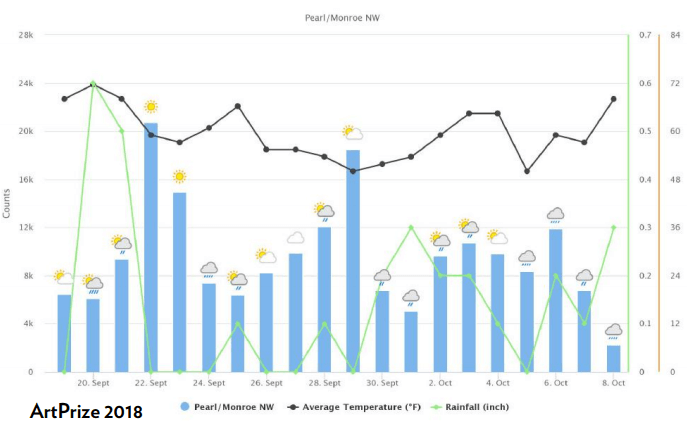 As ArtPrize continues to grow in popularity, count data will serve as an essential tool for festival planning. Although small and discreet, people counters play a large role in Grand Rapids, allowing city managers to tell the story their great downtown.

Learn more about Downtown Grand Rapids Inc on their website here, or about the ArtPrize festival here.

Don’t miss the 2019 installment of ArtPrize which takes place between September 7th and October 27th in Grand Rapids, Michigan.

On the Sunny Side of the Street: Pedestrians Flows at… (...)
Planner Resources: How to build a bike count program
Planner Resources
(...)
2017 in numbers #2: North America’s Top 5 Bicycle Counters
Data Visualization
(...)